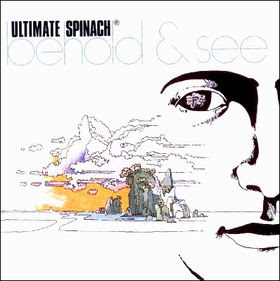 Ultimate Spinach's second album is a slightly more subdued continuation of the derivative psychedelia in their debut. Again, it's like a hack take on West Coast groups. There's Country Joe & the Fish in Ian Bruce-Douglas' electric keyboards (which don't play anything as good as his solos on "Sacrifice of the Moon" from the first album); Jefferson Airplane-like female vocals (by guest singer Carol Lee Britt) and songwriting on "Where You're At"; some Quicksilver Messenger Service-type guitar arrangements on "Mind Flowers"; a melody and vocal reminiscent of Kaleidoscope's "Keep Your Mind Open" on "Fragmentary March of Green"; and more. Songwriter Bruce-Douglas' lyrics are unintentional hippie parodies without any irony or humor, whether solemnly aspiring to a beatnik state ("take a trip to the center of your mind") or indicting the straight world ("he has an ulcer in his brain, from thinking of how to divorce his wife"). When the album turns to social critiques, it's uncertain whether the band is trying to mimic the Mothers of Invention without the wit, or whether they're unwittingly embodying the very kinds of groups whom the Mothers took the piss out of on "We're Only in It for the Money". [Richie Unterberger/AMG]

Tracks :
1. Gilded Lamp Of The Cosmos
2. Visions Of Your Reality
3. Jazz Thing
4. Mind Flowers
5. Where You'Re At
6. Suite:Genisis Of Beauty
7. Fifth Horseman Of The Apocalypse
8. Fragmentary March Of Green

If you enjoyed their first one !!!
Αναρτήθηκε από imnotgod στις 16:45

Having the LP's for decades I wanted them for my mp3 player. Thank you for the upload. A True Gem