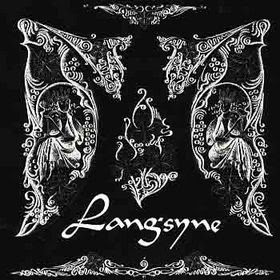 Lang'syne appear to be another one-album wonder as they released an amazing self titled folk album in 1976. Lang'syne sing in English and their brand of folk bares little resemblance to the earlier kraut-folk bands like Broselmaschine, Emtidi, Holderlin, and Witthuser & Westrupp. Throughout the album, there are small touches of a German and Eastern ethnic feel to the music, but for the most part their sound is a bit more Anglo influenced. Many of the lyrics and much of the music appear to have a dark, longing quality which results in the album sounding a bit mystical, and occasionally even Renaissance-style.
The standout track is the instrumental 'Cynghanedd'. 'Cynghanedd' begins like an Eastern-influenced ballad, or "Melodie der Natur" as described in the CD sleeve. This track utilizes natural sound of birds and insects and ends with an interesting interplay of 'dueling'-guitar chord sequences. Another track worth mentioning is 'Medina' which has sporadic touches of Witthuser and Westrupp sprinkled throughout.

Besides Emtidi and Broselmaschine, this is one of my three favorite german psych-folk albums !
Αναρτήθηκε από imnotgod στις 17:11