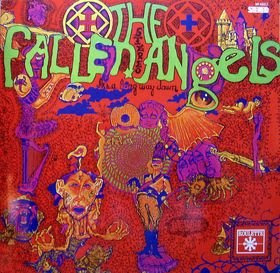 This legendary band known as The Fallen Angels, formed in 1965, were a dynamo of musical creativity and stage theatrics. They had an amazing ability to synthesize diverse musical styles (i.e., Beatles, Dylan, jazz, classical, etc.) into a cohesive sound that was distinctly their own. And as anyone who ever saw them perform live can attest, their grip on an audience was nothing short of charismatic. Excellent musicians all, the band members were ravenous mimics with a penchant for political satire.

One of the ultimate examples of the East Coast psych sound; moody, intricate, with a peculiar intensity. A long time favorite of late 60s collectors and no wonder as it has the makings of a masterpiece. Hard to pinpoint really, but some parts are like a high-brow Common People, others like a folkrock Mandrake Memorial. Arrangements and songwriting are most impressive, with "A Horn Playing On My Thin Wall" being a personal favorite. Often compared to the equally rare Morning Dew LP but this is deeper and more original.

A really good album! Theysound a bit like a mix between "Forever Changes" era Love and The Doors.