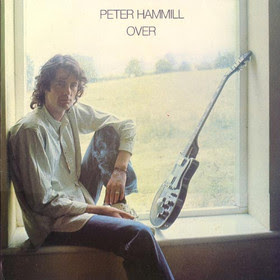 Being the singer of one of the most influential British progressive rock bands ever, Peter Hammill’s "Over" is not what you should expect from the man who delivered most of the songs for VDGG.
“Over” is released during one of the last VDGG years. It sounds more as an album of a singer songwriter than as a progressive rock release. “Over” is one of the most intense listening experiences you can imagine.
Clearly the boundaries of musical styles don’t bother Hammill. The listener hears some influences from folk, rock and classical music as well. Hammill is a varied vocalist. His voice is sounding raw, unpolished and very emotional at the same time. Highly original are the vocal harmonies which show many different sides of the man’s voice.
There are members, as ever, of VDGG, in Guy Evans on drums, Nic Potter on bass, and the former String Driven Thing member Graham Smith on violin.
Some tracks are plain acoustic with only one or two instruments present other tracks do have full instrumentation. In either case the overall feeling is sobriety.

Very rarely does an album have so an intense emotional effect on me !!!
Αναρτήθηκε από imnotgod στις 12:37

Cool blog, classic Hammill--I agree it's probably his most emotionally accessible. Recently posted about it on my blog.