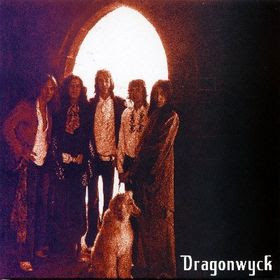 This group from Cleveland were one of the most promising bands from the early 70´s in that area. After their first legendary 1970 heavy-psych album the keyboardist changed, and the band left their garagey Doors influences to create their own sound.
The music on these well produced stereo-recordings exists only on acetate (10 copies), and drifted more into the British vein of progressive rock, like King Crimson, Pink Floyd or Yes, but also reflects US-West Coast feeling like It´s a Beautiful Day.
By 1972 Dragonwyck was performing Moody Blues´complete 'Days of Future Passed' live on stage (!!!) The 10 original cuts included here, however, are intense and very unique with strong melodies/vocals, heavy guitar solos and an extreme variety of keyboard and vocal sounds an awesome mix of heavy underground rock with classical chamber-music style/elements.
There are 2 bonus tracks from a 45´record which was released in 1974.