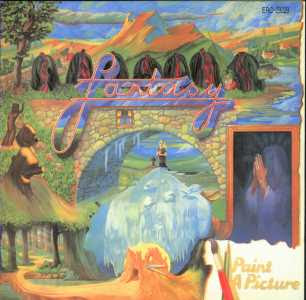 Before writing my own review of this album, I have to admit being a bit biased. I really love this style of early English progressive rock, that’s why I named my blog Fantasy. Fantasy's "Paint a Picture" is an example of prototypical progressive rock that appears to be as influenced by The Moody Blues as by King Crimson. In this way, Fantasy compares to Spring, Gracious and Cressida. The band's original guitarist had died accidentally before this was made and subsequently the lyrics reflect issues of loss, madness and an overall questioning of existence. The songs are mostly short (2 -5 minutes) and at their best feel like that wonderful combination of sunshine with a breeze. The sound is generally fairly mellow, but much like the album's beautiful cover it is painted with a diverse and colourful palette. In other words, while most of tempos are relaxed and there aren't that many time changes, there is a lot going on: acoustic guitars, electric guitars, organ, mellotron, bass, and drums all combine to form the main melody, and then, at times, separate to present variations. The exception to this is the seven minute long "Circus." This is generally considered the most progressive song in this set, and it is the most uptempo and varied. However, my favourite is the title track which has a very dream-like feel to it. Their second record "Beyond the Beyond" which was rejected by Polydor in the 70s was released on CD in 1992. This is truly a very great album that I would recommend heartily !!!

Enjoy !!! It's one of my top hundred "desert island" albums.

You can find a download link on this blog :
https://williesaid.blogspot.com/2017/04/fantasy-paint-picture-1973.html
Link :
http://www.mediafire.com/file/s0pd2uhbs70g7hk/FantaPaint.zip