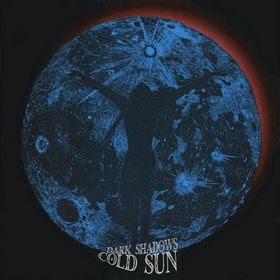 Great and fantastic psychedelic LP, recorded in 1969 but released just in 1989 that Rockadelic unearthened it !
Fantastic dark psych explorations sometimes reminding 13th Floor Elevators, sometimes the darkest Doors sounds, HP Lovecraft, etc...
Very unique and much recommended !!!
As with many things in their history, the name “Cold Sun” is enigmatic. The 1989 retrospective album on the Rockadelic label that first brought the Sonobeat recordings to light didn’t even appear under that name, but as “Dark Shadows” which is the title of a popular 1960s mystery TV series. In the liner notes Miller denied ever having been in a band called Cold Sun, and suggested that they had always been called Dark Shadows. However he had referred to the band’s real name in a 1976 interview, where he mentioned that before playing with Roky Erickson in the Aliens he “spent seven years developing the electric auto-harp with a band called Cold Sun”. The name itself is derived from the legends of MU, made famous by the writings of Col James Churchward and more recently by the great 1970s rock band of the same name, led by Merrel Fankhauser. MU and the Lemurian mythology was popular in Cold Sun circles, although Miller says that he tried to come up with an even better band name later on.
Track Listing :
01. South Texas - 5.19
02. Twisted Flower - 3.02
03. Here in The Year - 8.53
04. For Ever - 4.26
05. See What You Cause - 3.41
06. Fall - 7.12
07. Ra-Ma - 11.18
08. Live Again [Live Bonus 1972] - 10.18
09. Mind Aura [Live Bonus 1972] - 7.26
Links : http://sharebee.com/83b4b273 (Part 1) + http://sharebee.com/3c104e9b (Part 2)
(taken from http://chrisgoesrocks.blogspot.com/ )
Not to be missed, a true buried treasure !!!
Αναρτήθηκε από imnotgod στις 13:39

FINALLY! THE RIDICULOUSLY RARE 300 RUN LIMITED PRESSING BY THE SHORTSIGHTED ROCKADELIC, A COMPANY INFAMOUS FOR RELEASING MOSTLY RARE GARBAGE IS FINALLY AVAILABLE AGAIN! ROCKADELIC REALLY DID THE WORLD A DISSERVICE, AND NOW THE WORLD IN SOUND LABEL REMEDIES THEIR ERROR WITH A VASTLY SUPERIOR PRESSSING. DEMAND HAS BEEN SO HIGH THAT THE POOR QUALITY GREEK BOOTLEG HAS PREVIOUSLY SOLD IN THE 3 FIGURES (NOW IT SHOULD BE VIRTUALLY WORTHLESS). GET THIS WHILE YOU CAN, MAKES THE ROCKADELIC AND BOOTLEG PRESSINGS OBSOLETE!