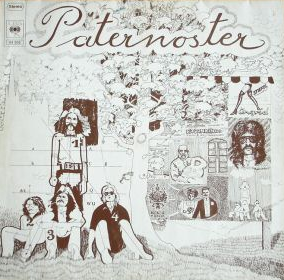 PATERNOSTER was one of the few prog rock bands to emerge out of Austria, aside from EELA CRAIG and KYRIE ELEISON. They released their one and only album in 1972 on the CBS label. In 1991, a small German label called Ohrwaschl had reissued this on CD, but because the master tapes were lost, it was a direct from LP to CD recording. Don't let that scare you off, because the sound quality is great, and there only the occasional cracking.
PATERNOSTER was lead by organist/vocalist Franz Wippel. His singing is really peculiar, think of a depressed version of PROCOL HARUM's Gary Brooker with a Germanic accent and you get the picture how he sounds like. The rest of the band consisted of Gerhart Walenta on drums, Gerhard Walter on guitar and vocals, and Heimo Wisser on bass.
Musically they're an early '70s prog band with psychedelic leanings. Hammond organ is the only keyboard used, and the guitarist uses that late '60s psychedelic fuzz lead.

Franz Wippel was the group's sole composer and what a monster he created–seven tracks of organ-drenched prog with heavy psychedelic leanings. There's a definite krautrock feel in that it's both acidic and cosmic with a loads of atmosphere.