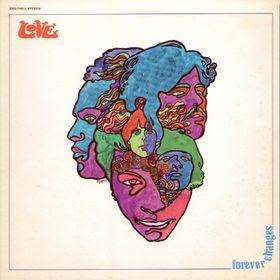 I 'm sure most of you already know this masterpiece. But as it's one of my favs for times, I can't let it out of my blog.

One of rock's most overlooked masterpieces, this third album by the L.A. folk-rock outfit led by inscrutable singer-songwriter Arthur Lee sounds as fresh and innovative today as it did upon its original release in 1967. With David Angel's atmospheric string and horn arrangements giving the work a conceptual underpinning, Lee explores mainstream America's penchant for paranoia ("The Red Telephone") and violence ("A House Is Not a Motel") with songs that are as sonically subtle and lilting as they are lyrically blunt and harrowing. Add two gems by Love's secret weapon, second guitarist Bryan MacLean ("Alone Again Or" and "Old Man"), and you've got one of the truly perfect albums in rock history.

To the uninitiated, it helps to know that Love was Jim Morrison's favorite group !!!
Αναρτήθηκε από imnotgod στις 14:22

Rare as it is, visual documentation of Love in 1968 can still be found:

Re the youtube link...Well...It's gone now and in it's place is the usual cop-out copywrite infringement excuse. Who are these oh so sad people. Have they no feeling for the true value of this music. This is our past...our heritage. Have a heart, for f***s sake!!!!

By the way although I'm forced to sign off as "Anonymous" my name is "hudois" There...I've outed myself!!

Have to say, the word "masterpiece" rarely applies better than in the case of this album! Just waxed poetic about it myself over on my music blog. Have a good one!