JEREMY STORCH - From A naked Window (US singer-songwriter - 1970) 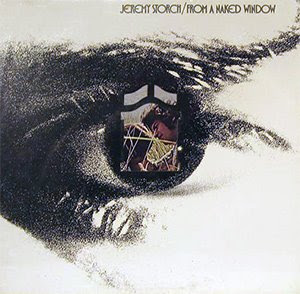 If you've ever heard his name, singer/keyboardist Jeremy Storch is probably known to you for his work with The Vagrants. It's doubtful more than a few folks have ever heard any of his early-1970s solo work, or have a clue of where life took him.
With the breakup of The Vagrants, Storch found himself signed to a solo career by RCA Victor. Released in 1970, Storch's debut "From a Naked Window" teamed him with producers Gary Illingworth, Ernie Aitschuler and Al Schwartz and a host of New York sessions players. The album was actually very good, though anyone expecting to hear something along the lines of The Vagrants' brand of heavy garage rock was bound to have been surprised to hear Storch-penned originals like 'Dream City' and 'Delia'. I was certainly dumbfounded the first couple of times I played the album. Largely abandoning The Vagrants-styled rock and roll grunge, Storch plunged headlong into anguished singer/songwriter mode, occasionally sprinkled with a lysergenic blanket. While the results weren't exactly the year's most upbeat collection, the material proved well suited for Storch's slightly nasal and strained voice. About half of the album was stark singer/songwriter material - 'Playground' and 'Message In the Wind' simply showcasing Storch and keyboards. The rest of the material featured more elaborate arrangements (courtesy of Illingworth), including a couple with classical influences and a couple of fuzz guitar supported efforts ('Man In the Sky' and 'Lady In the Sand'). Interestingly with the exception of the closing instrumental 'Delia', all of the original songs were bound together by Storch's highly personal and strange lyrics - 'Lynn and Sue Are a Country' appeared to provide a nod of approval to lesbian relationships. Fascinating in a weird, hard to describe fashion, the results probably horrified Vagrants fans.

Imagine an American version of Peter Hammill and you'll have a feel for what the set sounded like.

The penultimate track ("I Feel a New Shadow") was sampled *prominently* on DJ Shadow's "Building Steam With a Grain of Salt" on his (masterpiece) album "Endtroducing."

Also, Jeremy Storch totally sounds like Yakko from Animaniacs in that song.

Thanks a lot for posting this. It's pretty cool.

I'm not sure I would've gone for so much noise reduction though. It takes a while to get so you can recognize the sound of noise reduction, but once you do, you know what it is when you hear it.

Jeremy Storch is alive and well! Still does music. Jeremy did some stuff with Eddie Money and Dave Mason. I have read his life story - very fascinating! http://www.thetabernacleinbranson.com/rabbi_jeremy_storch.htm
Check it out! Be blessed - peace out!

You can hear him on Pandora!