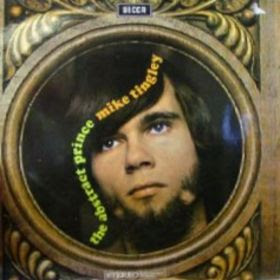 I recently discovered this wonderful album on the amazing website of my French friend -
http://www.thestrangeexperienceofmusic.com/article-20810492.html .

It's a true hidden treasure, a real gem of early pop-psych-folk, with nice vocals, well-crafted songs, interesting orchestral arrangements and so cool 60's vibes. It's the sole LP of this Californian artist, released in Holland in 1968.

Review by Mr. Mike Tingley :
I have been asked to write a few lines for this LP. But where do I start? I think I am just now realising what has taken place. I will start by thanking to everyone who was involved in the making of this record. And there are so many that added so much to it. My producer, Tony Vos, whose guidance and supervision I couldn't have done without. My recording technician, Gerard Beckers, whose skill in a control room was consistently outstanding. The drummer, Cees Kranenburg and the bass player, Jan Hollesteller, who both demonstrated the only thing that only a good musician can...talent and plenty of it. And speaking of musicians, I really owe a special debt gratitude to Bert Paige, who did all the orchestra arrangements and to all the studio musicians participated in this LP. There is only one word to describe their contribution to this music...beautiful. There are so many other people directly or indirectly involved, that I could never write them at down on this jacket. But my heart felt thanks go out to each one of them just the same. I was also asked to explain each of my songs. I thought a lot about it and decided that it wasn't fair, in a way, to you the listener. Although, when I wrote each song I had a definite idea in my mind, these were only my impressions. I feel that if I were to explain each song to you, it wouldn't give you an honest chance to develop your own impressions. And this is what I think is one of the most important parts of any music: the capacity to be interpreted differently, depending on who the listener is. I would like to end by thanking you, the listener, for giving me this opportunity to express the many emotions and thoughts that are contained in each and every groove of this LP.

Thanks for listening to some of my old material. What can I say, it was the sixties. I still write and play.

i am missing songs 2-4 is this correct

This stuff is good!! Dare I say it reminds me of 'Forever Changes'?

A great lost album, for me, a perfect masterpiece.

A new link on Mediafire is working.