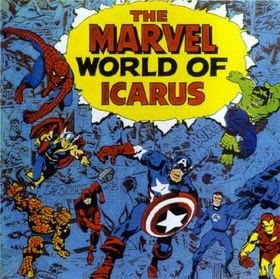 Super rare killer early UK '70s progressive / psych album originally released on Pye. All members of Icarus were huge fans of Marvel Comics, hence the basic concept of this LP. As you can see from the track list, each title is based on a marvel character. Sadly at the time, the head of Marvel found out about this shortly before release and demanded a 50% share of the royalties. Instead of giving in, the record company simply withdrew the LP.

Each of the players on this fast-rocking album with a strong progressive touch presents themselves as comic character, ranging from Spiderman via Conan the Barbarian to the Hulk. The lyrics likewise deal with the vicissitudes of these heroes, lending the album a comparatively agreeable degree of fun. As the instrumental and vocal abilities of the band are no less than good, the only flaw is the lack of outstanding compositions, although a few highlights are present nonetheless. These include the scary intro to Hulk, the propelling rhythms of Conan The Barbarian, almost all flute parts, almost all of the opening track on the 'B' side, Thor and the slightly psychedelic Silver Surfer. All in all fun to listen to.