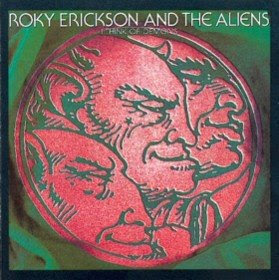 Erickson co-founded the 13th Floor Elevators in late 1965. He and bandmate Tommy Hall were the main songwriters. In 1966 (Erickson was 19 years old) the band released their debut album The Psychedelic Sounds of the 13th Floor Elevators. Psychedelic Sounds had the band's only charting single, Erickson's "You're Gonna Miss Me." A stinging post-romantic breakup song, the single remains probably Erickson's best-known work: it was a major hit on local charts in the U.S. southwest, and appeared at lower position on national singles charts as well. Critic Mark Deming writes that "If Roky Erickson had vanished from the face of the earth after The 13th Floor Elevators released their epochal debut single, 'You're Gonna Miss Me,' in early 1966, in all likelihood he'd still be regarded as a legend among garage rock fanatics for his primal vocal wailing and feral harmonica work." In 1967, the band followed up with Easter Everywhere, perhaps the band's most focused effort. The 13th Floor Elevators released their fourth and final album Bull of the Woods in 1968. Due to Erickson's health and legal problems, his contribution to the album is limited, with guitarist Stacy Sutherland taking more of a leading role.

In 1968, while doing a stint at Hemisfair, Erickson started speaking nonsense. He was diagnosed as a paranoid schizophrenic and sent to a Houston psychiatric hospital, where he involuntarily received electroconvulsive therapy. The Elevators were vocal proponents of mescaline (peyote), LSD and marijuana use, and were subject to strong attention from police. In 1969, Erickson was arrested for possession of one marijuana joint in Austin. Facing a ten year prison term, Erickson pled not guilty by reason of insanity, which proved to be a mistake. He was first sent to the Austin State Hospital. After several escape attempts, he was sent to the Rusk State Hospital for the Criminally Insane, where he was subjected to more electroconvulsive therapy and Thorazine treatments and held until 1972. When released from the state hospital, Erickson's mental outlook had changed. In 1974, he formed a new band which he called Bleib Alien, Bleib being an anagram of Bible and/or German for Stay, and "Alien" being a pun on the German word "Allein" ("alone") - the phrase in German therefore being "Remain alone". His new band exchanged the psychedelic sounds of The 13th Floor Elevators for a more heavy metal sound that featured lyrics on old horror film and science fiction themes.
"Two Headed Dog (Red Temple Prayer)" (produced by The Sir Douglas Quintet's Doug Sahm) was released as a single. The new band renamed itself Roky Erickson and the Aliens. In 1979, Erickson recorded 15 new songs with producer Stu Cook, former bass player of Creedence Clearwater Revival. These efforts were released in two "overlapping" LPs - TEO/CBS UK, and The Evil One/415 records.
Track listing :