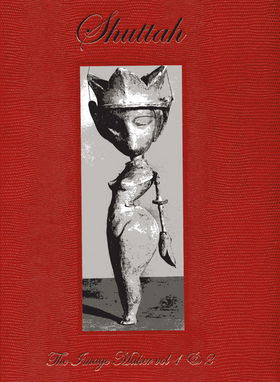 Only 1 known copy, a perfect acetate.
The Image Maker Vol. 1 & 2 is a real underground concept album with a progressive touch that only needs a few spins to get it right. Well-crafted songs, great vocals, sound-effects, organ and heavy fuzz guitar all combine to make up one of the better albums on the Vertigo label with a good dose of acid in it.
Shadoks Music spoke to Geoff Oliver, the former owner of IBC recording studios, but he could not remember any of the recordings made by Shuttah in his studio -- there were just too many engineers busy at the same time, during those golden days of the London underground, where studios were recording music which became big hits. IBC was famous for making recordings for bands such as The Kinks, The Who and The Beatles, plus many, many others, which leads one to the conclusion that this recording of Shuttah was very expensive to make, so there MUST be a famous musician behind it. The recording, arrangements and concepts are on a very high professional level. Even a search at UK copyright control did not show any results revealing the identity of who, exactly, Shuttah was. Since the original acetates appeared many years ago, this is still a very provocative unsolved mystery of the UK underground. The word Shuttah is a religious reference, if you have a Bible handy. The title of the album The Image Maker also suits the religious meaning.
Double CD containing the only known recording by this unknown UK progressive rock band that survived as an acetate. Funky, atmospheric concept based progressive rock from 1971 with swathes of heavy keyboards, harpsichord, bass, guitar and melodic vocals that at times sounds like Home's "Alchemist" epic. What distinguishes this album is the top quality production and fully detailed booklet and it all adds up to one stunning reissue.

Excellent and very rare....thank you for sharing this excellent album......very much obliged.