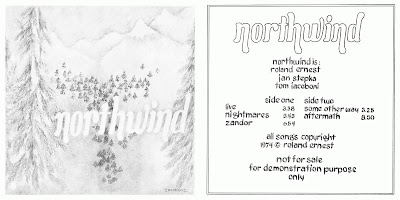 The original Northwind band was founded in 1968 by Roland Ernest and Jan Stepka. They were inspired originally by bands such as the Doors, Cream, the Moody Blues, the Beatles, and Procol Harum. Northwind was later heavily influenced by ELP, Yes, King Crimson, and Genesis.
The band went through four membership changes. The first incarnation had drummer Steve White. In 1970 they created and performed an original rock opera entitled “Looking Back.” In 1972 they recorded an untitled demo album featuring the song “Last Day at Lokun.” Tom Iacaboni replaced Steve White on drums when Steve left the band to pursue the guitar.

In 1974 Tom, Jan and Roland recorded the world famous (in collectors' circles) Northwind demo album in Roland's family's basement. This album is often erroneously referred to as “Woods of Zandor”.

Tom was at heart a jazz drummer, and when he left Tim Cahill joined on drums and percussion. For a short period, Bob Pascoe contributed his rock guitar to Northwind's sound. Northwind then performed mostly in clubs and created a reputation in Canada. This period largely had the band playing covers of other rock bands' material. In 1977 returning to original music, Roland took over guitars and the band added the talents of Rob Foster on wind instruments. In 1978 the band recorded their magnum opus “Distant Shores” in Roland's family's basement in Sterling Heights, Michigan. One song, “Just Yesterday,” was released as part of a local radio station's compilation of Detroit area bands' music entitled “Home Grown”. Tim Cahill's religious calling conflicted with his perception of the rock and roll lifestyle leading him to leave secular musical performing. Howard Wells joined the band on drums and percussion for rehearsals while Roland and the band's manager Ron Geddish vainly persued a record contract. Northwind broke up in 1978 largely because of this failure.

Extremely rare, don't miss it (even if the quality is not always as I expected) !!!

Another gem needed to be unearthed !!!
Αναρτήθηκε από imnotgod στις 15:03

Sorry Ivancho89, I can't post the lyrics.
They are not available anywhere on the web.

But I'm also interested if someone can help us !

I have a copy of "Last Day of Lokun" for auction on ebay.