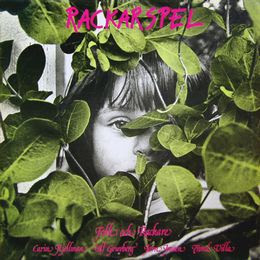 Swedish/Norwegian folk group starting with vocalist Carin Kjellman and guitarist Ulf Gruvberg, who had released one album "Med Rotter i Medeltiden" ('With Roots In The Middle Ages') on Swedish Sonet '74.

"Folk Och Rackare" ('Folk And Rogues') on the Swedish YTF label '76 found them augmented by fiddlers Kalle Almlof and Jonny Soling, who left that year, but the duo established a long-lasting lineup Dec. '76 with Norwegians Jorn Jensen and Trond Villa both from the Norwegian folk-rock group Folque.

The debut album was "Rackarspel" (1978), but "Anno 1979" on Sonet was far more accomplished, with clearer musical direction. "Stjarnhasten" (1981) continued an innovative fusing of Nordic folk musics, and "Rackbag" on the Swedish Amalthea label '85 found them expanded to a sextet with Affe Byberg and Olle Westbergh, plus guest Richard Thompson. Kjellman's eponymous solo album on Amalthea that same year was a departure, veering away from folk towards rock, including translations into Swedish of songs by Thompson ('How I Wanted To' and 'It's Just The Motion') and Sandy Denny ('Winterwards' and 'Solo'). Kjellman also sang on Thomas Lindahl's Det Krokta Rummet on Amalthea in '87.

Folk Och Rackare never achieved the success outside Scandinavia that their accomplished act deserved; that breakthrough was left to Filarfolket, who became stalwarts on the international folk festival scene in the late '80s-early '90s. Ulf Gruvberg became increasingly important in Swedish radio, responsible for live music broadcasting, and also produced Hedningarna, an influential Swedish group of the early '90s including Swedish and Finnish musicians.

Another very great one posted especially for Dominic from Aumgaia and all Scandinavian folk lovers !!!
Αναρτήθηκε από imnotgod στις 13:11

Many years ago I had this lovely material. Today is a great surprise to find it.