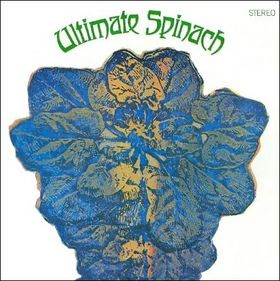 Ultimate Spinach was a psychedelic/ hard rock/ blues band originally from Boston. In their '60's heyday they specialized in lengthy songs such as "Ballad of the Hip Death Goddess", from Ultimate Spinach (1968) and "Genesis of Beauty", from Behold And See (1968).
The Ultimate Spinach, comprised of keyboardist/guitarist Ian Bruce-Douglas and singer Barbara Hudson was a band of Boston's alternative scene in the second half of the 1960s. The phenomenon of a "Boston Sound" was more a publicity stunt than a legitimate artistic movement, and the Bruce-Douglas version of the band tends to be remembered for its name. The music is largely forgotten. On Ultimate Spinach (MGM, 1968) the standout cuts are the suite "Ballad of the Hip Death Goddess", with an instrumental interval for theremin (an early electronic instrument), feedback and reverberation, and the psychoanalytic folk-blues "Ego Trip".

I really love this Boston-sound.
A must have psychedelic album !!!
Αναρτήθηκε από imnotgod στις 17:35