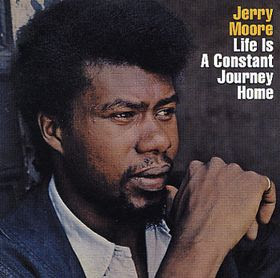 While performing folk songs in the Basket Houses of New York's Greenwich Village, trained guitar player and organist Jerry Moore was discovered by musician Randy Burns and signed to the cult "ESP" label. During the recording sessions of 1967's Life Is A Constant Journey Home, Moore brought aspects of folk, gospel, and r&b to a set of his own original songs, backed by musicians Eric Gale (guitar), Ralph MacDonald (percussion), and Warren Smith (percussion). Life Is A Constant Journey Home also featured Detroit poet Dudley Randall's "Ballad of Birmingham," which captures the KKK's devastating bombing of the 16th Street Baptist Church in Birmingham, Alabama. The transition of Jerry Moore from relatively unknown Greenwich Village entertainer to recorded musician and voice for social change was short-lived, as Moore became a street preacher before virtually disappearing into anonymity.

Original LP track order (as shown on release) was:
Side A: 1.Life Is A Constant Journey Home; 2.Drugged; 3.Anti Bellum Sermon
Side B: 1. This Is My Time; 2.Ballad Of Birmingham; 3.Winds Of Change; 4.Let Go, Reach Out

An amazingly soulful set of jazzy folk tunes from the late 60s -- the only album we've ever seen from singer Jerry Moore, and a real rarity from the ESP label! Moore's got a style that's somewhere between Terry Callier and Tim Buckley -- earthy and acoustic one minute, but stepping out with some hipper rock-influenced touches the next -- in a style that makes the album way more than just a conventional folk set.

many thanks to you!

Jerry Moore is not a trained guitarist or keyboard player - I'm almost self taught :-) people would show me stuff - Phoebe Snow showed me E and D module tuning - one night on Ave D subway platform Paula Balan taught me how to Cotton Pick - when I bought my first guitar in a pawn shop in 61 I tuned it to an open chord - bought a Mel Bay git bk and learned how to make chords - I guess people think I was trained muscian because Mom played Organ and paino and directed choirs - pops played violin and tuba and both sang - my brother and I broke his violin - he would play w/ mom at home and once in awhile on special programs at church - mostly he preached and sang - took a couple of paino lessons when very young - later in life mom would say - don't you wish we had forced you to play? and or if we had known you were going to end up playing music we would have made you take lessons. Junior H.S. ended up playing trumpet - started as a drummer - when I brought the drum home mom said "you hate me" in Gary the high school had a marching band - drummers were really cool - spinning the drums throwing up drum sticks while they marched - had spats and capes but when we moved back to NY - the Bronx -no marching band - orchestral setting - so I switched to trumpet. Really enjoyed reading your post though. I did some recordings for other companies and am going to put them online soon
Thanks
Jerry
jerrymooremusic@google.com

Thanks for this link. Always wanted to hear this LP and is very hard to come by! Much appreciated

I have one of the original records, white label (no printing), black album cover, no art work or printing, Won it in college, from the college radio station, 1967-1971.