Poetica In Silentio "What Do Fish Know" ( Dutch Eclectic Rock 2003 ) 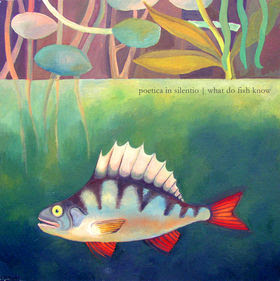 Since 1993, the Dutch alternative rockband Poetica in Silentio combines heavy guitars, vocal harmonies and a tight rhythm-section with violin, flute and samples to create their own, unique sound.
This is their third CD and also their second full length release.
They are a real DIY band, they wrote, played, recorded, produced, mixed and released the album. But the result is brilliant.
It’s a great album. Although you can refer to a lot of other bands from the past, it also has a touch of originality. Let’s start with the lead vocals. He has a voice that sounds like the singer of Crash Test Dummies or Sylvan. But the way he sings, sometimes in a narrative way, is more the Peter Hammill style. In some songs, he puts a lot of energy in his vocals and in others he uses it in a quiet way. Helped by the other musicians – almost all of them have vocals behind their names in the credits – it has become a very vocal album, without discriminating the music.
The flute of Daan gives the first song a very Ian Anderson feeling. In other songs, he plays the flute in a less Anderson way. The violin of Christine has been put a little bit out of pitch, to give it that special sound.
The music of Poetica In Silentio is sometimes complex, maybe a bit like King Crimson, and sometimes very melodic. My favourites are “Behind The Door” and “Beggars Banquet”."The Dance" is the longest track and the Peter Hammill feeling pops up again, so the link to Van der Graaf Generator isn’t far away.
Because of the variation, it’s hard to describe the music from this album.

You can hear it here : http://www.megaupload.com/fr/?d=VPQZ6RSZ
I've ripped my CDR copy for you. So, sadly, no covers available !
I like this CD a lot, and as usual, with a complex album, it gets better every time you listen to it.
It's a very good follow-up after "Who Rolls The Dice" !!!
Highly recommended !!!
Αναρτήθηκε από imnotgod στις 08:55

I have found your great blog too late and this link on rapid is unfortunately dead.
Could you be kind and upload it again ??
Thank you very much indeed.