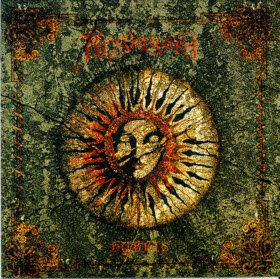 Thanks to Sakalli who posted this gem a few months ago.

Anglagard were a short-lived band who nonetheless generated critical acclaim and a loyal following in the early nineties with their brooding mellotron and synth heavy sound that also featured virtuoso percussionist Mattias Olsson and classically trained flautist Anna Holmgren.
The band formed in the summer of 1991 by guitarist and lead vocalist Tord Lindman and bassist Johan Hogberg. The pair placed ads to form a band in the vein of the seventies progressive bands such as Yes and King Crimson, which were successfully answered by keyboardist Thomas Johnson and guitarist Jonas Engdegard. Drummer Olsson and flautist Holmgren were soon added and by the following spring the band were touring and logging studio sessions.
Anglagard means "Garden of Angels" and never a name of a band has been so perfectly chosen, their music is almost celestial, even when they belong to the 90's the members avoid the use of instruments that weren't used in the 70's by their predecessors. Plethoric of magnificent keyboards and mellotrons, is hard not to place Anglagard albums in the same section of the old dinosaurs. Anglagard manage to walk that fine line in drawing inspiration from the seventies without ever being derivative. There are definitely passages reminiscent of early Genesis, VDGG or King Crimson, but these are superficial, and for the most part Anglagard pursue their own formula. The sound is brooding, with dissonance being a regular feature. The music still manages to captivate the listener, and some sections are nothing short of magnificent.
Only 4 songs in total, each song is lengthy, every song goes thru many changes in tempo, volume and mood -- many times within one minute and without sounding like it's straying, but adding and building. What's also interesting is that there isn't any one keyboard song or guitar song. All songs get an even amount of keys, guitar, guitar-guitar interplay, keys-guitar interplay. There are vocals, in Swedish, but of a short duration of only a minute in each song. One song is instrumental. After 44 minutes, you'll still want more.

This album is really amazing and it's one of my "top ten" desert island CDs.
Αναρτήθηκε από imnotgod στις 21:18

Thanks.The information which you have provided is very good and easily understood.
It is very useful who is looking for Hybris.

Thank you,so thank of this tutorial! Hope you have more the lession like this!AWS Training
Thank agains!