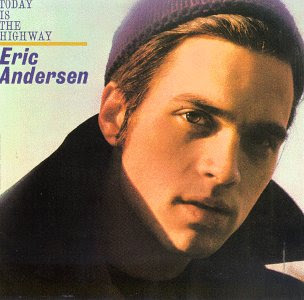 When Eric Andersen's debut album "Today is the Highway" was released in 1965, the notion of a folksinger writing his own songs was still new, inaugurated by Bob Dylan and adopted by only a small handful of others. Andersen was among the first crop of post-Dylan singer-songwriters on the '60s folk scene, and Dylan's influence can be heard strongly on this recording, which features only Andersen's voice and acoustic guitar.
Except for a cover of the blues standard "Baby Please Don't Go" that shows another aspect of Andersen's roots, all the songs are original. Most of them are very much after the style of traditional folk material, as the poetic ballad style that was to become an Andersen signature had yet to fully develop. Nevertheless, even at this early stage, Andersen's lyrical poise and his gentle, nuanced vocal style make listening to these elegantly simple songs a pleasure.