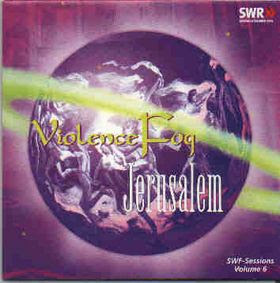 Whereas previous CDs released in the SWF-Sessions series were devoted to one band, Vol. 6 features VIOLENCE FOG and JERUSALEM.
The titles recorded for the former radio station SWF demonstrate both musical originality and considerable technical ability.
Compared to previous releases in the SWF-Sessions series, VIOLENCE FOG and JERUSALEM really belong to the ‘guitar‘ category, in VIOLENCE FOG’s case, with the noticeable addition use of flute and some impressive singing, while JERUSALEM are characterized by epic music pieces with West Coast overtones.
VIOLENCE FOG was formed in 1969 from members of various local bands in the Baden-Baden region (of Germany). It only took a few rehearsals before they were making successful live appearances where, apart from original compositions, their repertoire also included their own version of ‘Brother Where Are You‘ (Remo Four) and ‘Paint It Black‘ (R. Stones).
By the mid-seventies the group had achieved more than just local fame and decided to try their luck with SWF which was producing a series for potentially successful up-and-coming groups. On 23.4.71 the band achieved their aim and recorded the titles released on this CD in the radio station’s own studio U1 in Baden-Baden. Despite the motivation created by the SWF recordings the band broke up a few weeks later for professional reasons. Intensive research has failed to shed light on any other publishable title by the band.
Guitarist Enno Dernov and drummer Herbert Brandmeier later played together in Jud’s Gallery (SWF-Sessions Vol. 1), Enno Dernov leaving the group several months before the recordings were made at SWF. He went on to join Brainstorm and took over as bass player on their second LP before joining Respect. The twin brothers Karl-Heinz and Wolfgang Höfer changed over to playing folk music.
JERUSALEM was formed at the end of 1969 when Matthias Stein and Richard Reß quit the goup Intoxication and after Hungry Love with Günther Rüffel, Wolfgang Hilgert and Bernd Lewandowski split up. The five 16-20 year-old school kids and job trainees were already a permanent feature of the music scene in and around Landau in the Palatinate region of Germany and wanted to create their own sound, having become fed up with playing other people’s international hits. The highly motivated young musicians had soon put together a stage show featuring all their own compositions and were soon the number one attraction on the Landau music scene.
There were two reasons for the group’s popularity: the impressive interaction of the two lead guitars (Matthias Stein and Günther Rüffel) and the fact that JERUSALEM used two bass players (Richard Reß and Wolfgang Hilgert).The band’s music, following as it did the progressive trends of the time, was an expression of the creative potential of each band member and enthusiastically received by the fans. As a result of various appearances at the same gigs, JERUSALEM got noticed by other better-known bands like Ihre Kinder and Frumpy and were asked to play as warm-up group. A tour with Frumpy saw JERUSALEM playing not only in the south-west and south of Germany but also in Austria and Switzerland. JERUSALEM appeared on the same show as Fashion Pink (SWF-Sessions Vol. 3), Roland Schaeffer’s band. SWF had given Roland Schaeffer the job of organizing the talent contest for up-and-coming new bands. JERUSALEM were one of the applicants for the contest and on 04.06.1971 recorded the titles on this CD in the radio station’s own studio. All the songs were broadcast in the SWF 3 programme ‘Pop-Shop‘. However, the band were never able to take advantage of their resulting increased popularity. A few month after the SWF recordings singer and guitarist Matthias Stein died in a tragic motor cycle accident. Richard Reß, Matthias Stein’s friend of many years was so badly shaken that he gave up his musical career and withdrew from public life. These events marked the end of JERUSALEM. Intensive research has likewise failed to turn up any additional titles by this innovative band. The remaining musicians joined other local groups. Günther Rüffel plays for a cover band in his spare time. Bernd Lewandowski works as a free-lance musician.

VIOLENCE FOG and JERUSALEM are striking examples how Kraut and Progressive Rock was not only reserved for the big metropolises but was also a regional phenomenon.

You can discover them here :

where I've discovered this gem.

Thank you for posting this rare music! Your blog had more info than Cracks In The Cosmic Egg. Excellent!