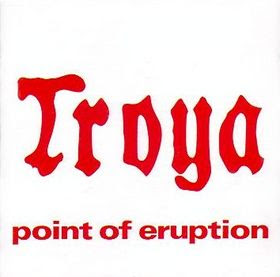 Influenced by classical and baroque music, in 1976 Troya released their unique self-financed sole album; Point of Eruption, with very little means.
The music sounds both melancholic and space, and is mainly guitar and mellotron driven.
The opener, She, introduces the disc with smooth organ and light guitar, to go on with beautiful symphonic piano and vocals. Battle Rock is more energic and alternates between epic and slow movements. The next song, Chromatik, features mysterious atmosphere and trippy guitar solos sometimes reminiscent of Novalis. Festival announces that the second part of the album will be dominated by organ and mellotron and is very psychedelic. The two final tracks Sinclair and Choke conclude superbly the album and let the listener in the sky...

I don't know why but I really love this album. It's a pity that it's too short and the sound quality is below average.